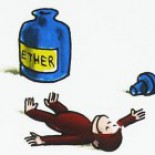 “I need to get home,”  Victoria said.  “I have a long day of  staring at the walls ahead of me.”
“Me too,”  I said.   “Those walls aren’t going to stare at themselves, you know.”
I’m disproportionately proud of that line.  I’m not usually that witty. Victoria, my new best friend, brings it out in me.
Victoria’s a nickname; her real name is Vicky.  (She once had an altercation with a cashier at Jamba Juice, who asked how to spell her name, as if it was necessary to know in order to announce that her Jazzy Razzmatazz was ready.  The cashier asked if it was Vickie-with-an-i-e or Vicki-with-an-i, and Vicky-with-a-y lost it.  “My name is Fucky,” she sad.  “F-u-c-k-y.”  It may have been then that she started using Victoria.)
Vicky’s a civilian, which is what I once called anybody who didn’t work in the entertainment industry.   In the one-horse town of Los Angeles, it’s hard to find civilians.  Here in San Francisco, it’s hard to find people who aren’t.
I used to think that without the business to talk about, there’d be nothing to talk about at all.  It turns out that isn’t true.  In fact, it’s exactly the opposite:  when there’s no sensible reason to talk about how much the Coachella lineup sucks,  there’s much more to say.   In the real world, not too many people care that Guided By Voices are going on tour or that the Black Keys aren’t ready for arenas, and I’m trying to live in the real world.
I’m failing.  Miserably.  It’s like I’m trying to speak a new language by hunch.   I’ve spent two-thirds of my life around adults eager to discuss the splendor of OK Computer or the horror of Nicki Minaj, and, while I’m brilliant in conversations about how Charlie Walk fucked up Epic Records, when it comes to talking art or Occupy Oakland,  I’m tragically inept.
Sometimes it makes me feel bad.  Sometimes it doesn’t.    While I have a collection of friends in Los Angeles who are life-long and worthy, one of the problems with working in the entertainment business is that, when it comes to friendship, there’s a lot of quid pro quo going on.   I’m not innocent:  when I was a publicist, part of my job involved getting bands on TV, and one of my closest friends was the booker for a late night show.   It wasn’t until after I stopped doing PR that I realized I had more in common with a beet than I did with Betsy, and, more importantly,  that a relationship with a root vegetable would have been much more nourishing and a hell of a lot more fun.
It’s challenging, my life in San Francisco, and I want to go back to L.A.  But when I do, I expect it’ll be different.  I don’t need people like Betsy anymore;  I’m happy to hang with civilians.   My friends here are nannies, naturopaths and marketing executives.  Andrea’s an attorney, and Lucy teaches at UC Davis; Lani manages the electrical grid and Beth’s an interior designer.   Mylene’s fluent in four languages and, like me, she’s chronically unemployed.
Then there’s Victoria.   I’m not sure what she does, but I know who she is.   “My name is Vicky,” she says. “But my friends call me Victoria.”

This entry was posted on February 16, 2015 by Julie Farman in Uncategorized and tagged Fucki with an I, Nicknames.