A month ago, after I discovered the photos I’d left in my storage space,  I posted a photo on my Facebook wall of me and Eddie Vedder in Amsterdam.  I posted it mainly because I thought it was funny;  Eddie was doing his best to ignore me and I was doing my best to look captivated by whatever book he was reading.  I captioned the photo with a comment about how close we were and how Eddie liked me so much, and my friend Gretchen — who lives in Kansas — wrote “I’m pretty sure despite the photographic evidence that you’re making shit up.  Nobody ever had that much fun.”

My instinct was to write about how it wasn’t as much fun as it looked, but I stopped myself.  I remembered that  I was a person who knew that getting paid to be in Amsterdam with a rock star — even when the rock star was Eddie — was a blast. Thinking otherwise was just habit.

I started believing that my job wasn’t fun when I worked for MCA.  It was my first major label gig, and, despite working records by artists like the Jets and New Edition, I was thrilled:  I spent most of the first three months I was at MCA on the phone with my friends and family, talking about how fantastic my job was.  But then I took  Pebbles to Win, Lose or Draw and told the story about how I met co-contestants Ben Vereen, Jay Thomas and Bert Convy one time too many, and my office mate Susan tried to strangle me. She’d just quit smoking, so her behavior was extreme, but her desire to kill me was sincere — she later told me that she couldn’t listen to me make another hayseed call about my excellent gig. My boss Janie would roll her eyes when I got overly enthusiastic about the results of a photo shoot or an above-the-fold-story I’d managed to wrangle,  and Larry, Janie’s boss, socked me as I tried to take a photo of him to show my friends back home.   (I regret that I knew nothing about lawsuits back then,  although I probably wouldn’t have sued him or MCA because I was so stoked that Larry had even taken the time to punch me out.)   At first, remaining calm in the face of extraordinary events took effort, but by the time I started working at Epic in 1989, I was genuinely jaded.  I still got excited about records — the good ones, anyway — but over the course of  eight years,  the only time I was actually worked up was when I got my first bonus check, which, by the way, was for more than I’ve made in the last 12 months.

I was put out when I flew coach instead of business or first,  and I complained about it incessantly.  It never occurred to me that I was being a jerk, though, because I wasn’t quite as jerky as some of my coworkers.  I was only mildly horrified when a co-worker demanded to be let off a flight to New York when he wasn’t given a promised on-board upgrade, and I barely registered it when another exploded on a room service guy because he brought whole milk instead of non-fat for her coffee. I wasn’t even all that appalled when a Sr. VP screamed that people would be fired when he was given after-show passes rather than an all access laminate for a show that Epic had nothing to do with.  I did manage to  be embarrassed  when a promo guy got pissed off about the lack of quality wines on the menu of an expensive restaurant,  but it was only because I wasn’t then a drinker.  If dope had been a standard offering, and China White wasn’t available,  I would have been just as mad. 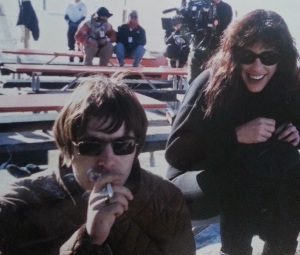 Although it was prompted by the  rose-colored glass of my rear-view mirror and not by a noble bout of self-awareness, my attitude shifted when I took a job at another label.   At Epic my bosses were cool,  and after I left, I worked for a woman who would have been straight out of Swimming with Sharks if Swimming with Sharks was set in an asylum.  She was nuts and made everyone around her equally crazy.   Working for her was not fun.  I tried to get out of town and forget about her as frequently as I could, and one holiday weekend,  I went to Aspen for a show Oasis was doing for MTV. And then, either because they were my favorite band and I was one of thirty people watching them play on a mountain or because I made out with Noel in an elevator,*   I realized how privileged I was, and I changed for good.

Sometimes I backslide and my entitlement rears its ugly head, but for the most part, I’m no longer the person I used to be.    It’s not that much of an accomplishment, given that these days there’s rarely an opportunity for me to get bent over a perceived mistreatment, but I’m proud nonetheless.  I could be going off on a bus driver about the lack of seating on the 720 or complaining that I have to walk Kenny and Walter even though they have eight perfectly good legs and could easily walk themselves.  I could have been loudly miserable when I was in a middle seat in coach the last time I flew, but instead, I relaxed and enjoyed the superior service, happy to be on board and all the better for it.**

*We were both falling down drunk,  and neither of us would have remembered the 6 second encounter if a producer from MTV didn’t mention it the next day.

**Total and complete lie.  I complained all the way from LA to New Orleans.

This entry was posted on February 17, 2015 by Julie Farman in Life, Rock and Roll, Showbiz and tagged Eddie Vedder, Label gigs, Oasis.