When I was working at E!, my boss, John,  emailed me for contact information for a publicist.   Rather than go to the database and look up her email,  I lazily typed her name into the cc field for a prompt, copied her address,

and replied to John.  “Here you go,” I wrote. “But be forewarned.  She’s the worst person ever.  Nurse Ratched meets Pol Pot meets that naked guy from Survivor, but meaner, more of a despot, and far less attractive.”

Thirty seconds after I hit send,  I got a response.  From the publicist.  I’d neglected to remove her address from the cc. “Good to know how you really feel,”  was all she wrote.

I was horrified but impressed.  Her reply was perfect.   Succint,  dismissive, zero fucks given.   I don’t remember if I wrote back, but if I did,  I probably wrote  “LOL.”

It was one of maybe a dozen times over the course of my working life that I’d sent an inadvertent cc, carelessly forwarded an email or unfortunately replied all.   I’ve done it plenty.  But it’s understandable:  I learned to write emails when emails were called memos and distributed on paper.  Cc’ing someone by mistake would have required twisting an extra piece of paper and a purply sheet of carbon into the roller of my IBM Selectric, correcting two sets of typos with gloppy white out, and the physical delivery of the memo to the unintended recipient by hand or by post.   It wouldn’t have happened.

I wasn’t taught to proofread address fields or read through emails before I forwarded them.   It was unnecessary.  So I get it when people of my professional vintage commit an  email atrocity.   I’m sympathetic.  People under 35?  Not so much.
It’s been a week since a 20-something guy looking to hire me to work with an elderly singer forwarded an email rather than writing a new one, and I’m still aghast.    It included the background of the project and the details of what needed to be accomplished, but it also included his response to a co-worker who asked for a photo of the singer.  “ill ask her for press shot but i doubt she has one she’s like 50 (sic),” he wrote.  It was efficient to forward the email, and as such a hallmark of his demographic,  but it was sexist and ageist, and as such a hallmark of idiocy unrelated to his training or relative youth. 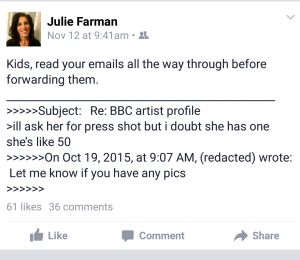 In search of both the enlightment and the entertainment my friends always provide, I  took a screenshot of the offending passage and posted it to Facebook.   I wasn’t disappointed.  Laura wrote:  “Maybe she has a daguerreotype rattling around in her handbag,” and  Tami noted that  maybe “because she is 50 she no longer has time for this BS.”  Jeff wrote that the post made him drool all over his manual typewriter, Rob commented that he laughed so hard his teeth fell out, and Liane suggested I consult my Meals on Wheels helper for guidance.

Ingrid confessed that at her first job, she asked a record company for a photo for the easily-over-50 Hildegaard Von Bingen. “That’s fantastic,” Tim replied, before going deliriously off-topic.  “Even better, this is the SECOND time in 24 hours I’ve seen Hildegaard Von Bingen come up in a FB post!  The first was in regard to Los Angeles faux-Krautrock band, Hildegaard Von Binge Drinkers.”

Finally Danielle delivered clarification.  My favorite millenial, she explained it all with an age-appropriate disdain for punctuation.   “Hahaha 50 is way too old for a press shot. What are you thinking Julie!!!!!!”

Regina asked if I had replied to the email.  “Inquiring minds want to know,” she wrote.  I told her that I hadn’t responded yet,
but that when I did, chances were that it would be simply a screen shot of my Facebook post and the comments that followed it.  That’s not what happened.

This morning I thought about all of the people who had shared their wisdom and experience with me early in my career, and I contemplated my sacred duty to pay it forward.  I set aside my wounded feelings and selflessly composed an email which I hoped would help my young correspondent as he continued on his path as a professional and a gentleman.  I dilligently provided links to essays about the signficance of grammar and  the importance of rereading emails before forwarding them, and I wrote a thousand tenderhearted words about the beauty and value of older women.   Then I gleefully erased it all, wrote “Lol lol lol lol u r a moron i am like 50!!!!!!” and hit send.

This entry was posted on November 16, 2015 by Julie Farman in Life, Showbiz.